How impactful are tenant improvements in the overall embodied carbon story of a building? Using our own office space in the historic Norton Building as a case study, LMN estimated that the sum of multiple interior renovations over 60 years has resulted in embodied carbon emissions comparable to the structure and envelope, perhaps more. Structure and envelope are the most studied aspects of embodied carbon and are written into codes and standards, while interiors embodied carbon are often underrepresented or absent. This study is part of the effort to better understand a more comprehensive carbon picture of our built environment.

LMN began this study in early 2019 with a curiosity about interiors’ impact on whole-building embodied carbon estimates. On average, commercial office interiors renovate every 10 years, with retail and hospitality projects at an even more frequent rate. However, little data existed on the relative importance of Interiors in designing for Zero Carbon, especially given the cyclical nature of renovations. With the overarching goal of creating carbon balanced buildings and sites, we set out to quantify the significance of total interior embodied impact over the lifespan of a building.

Since we have first-hand knowledge of the quantities and materials specified in our office’s most recent 2013-2015 remodel, we chose our own office for this case study. To incorporate the cyclical nature of renovations, we included all past renovations in our spaces since it was first located to the Norton Building in 1984. Furthermore, we extended the study timeframe back to when the building opened in 1959, thus providing the context of a whole building life cycle across 60 years.

The Carbon Leadership Forum embodied carbon TI study and calculator published in 2019 provided a springboard for this study. We began with their TI LCA calculator as a template, customizing it to include multiple renovations then inserted EPD information specific to the materials and finishes of our office renovations. Enough EPDs existed at the time of study to make reasonable estimates of embodied carbon for most of the Interior materials.

Step 1 – Assess the Scope of Each Remodel

Using archive documents from 1984 as well as staff interviews, the team determined that there were six renovations of various demo and new construction scope associated with our office space as of 2019. These included:

Figure 1 - The diagram illustrates the LMN office demolition and construction through three major renovations at an average of every 9 years, consistent with the assumption that workplace goes through renovations every 10 years.

Beyond these main remodels, there was additional temporary work on other floors to accommodate staff displaced by the remodels. However, these were excluded as the drawings were unclear as to what was new or reused within those remodels. Some of the furniture was likely existing in-place and not remodeled or was relocated to the temporary space without significant embodied carbon emissions.

Using the drawings and specifications for the remodels, takeoffs were done using floor plans as well as elevations of walls and furniture. Some assumptions had to be made due to lack of specification information, such as the thickness of interior glass or cabinetry details. Interestingly, the 1959 building was designed with reconfigurable metal partitions with the intent to avoid the cost and waste associated with remodels (3), however, none of these original partitions remains today and it is unclear when these were removed from each tenant space.

The past remodels brought up several questions that the team needed to address to move forward with the analysis.

Figure 2 - This study include A1-A3 data from EPDs. Other modules were excluded.

We gathered modern EPDs for materials used the renovation, using product specific EPDs where available, or industry average EPDs where they were not available. We inserted the Global Warming Potential (GWP, expressed in kgCo2e) for each material in the CLF TI calculator and multiplied by the quantity (basd on each Product Category Rule measurement). (4) We added many rows, and overrode the calculator’s data in nearly all cases since we had product-specific EPD data. This yielded the sum, or total embodied carbon impact of each renovation, as well as the sum of embodied carbon of all renovations during the period our office occupied the Norton Building. The numerical results are in Figure 7 and 8.

The initial results from the data show that our office renovations have had a significant impact on the measured whole building embodied carbon over the 35 years LMN occupied the Norton Building based on the available data.

With these two overlays, the Interiors embodied carbon is projected to be higher than structure and envelope combined over 60 years.

Figure 3 - Separating the results of the study into Structure, Envelope, and Interiors, arranged in 5-year segments. This scenario supposes that an additional remodel happened, equal to the 1995 remodel in embodied carbon, halfway between 1960 and 1995 as is a fairly conservative estimate. It also takes into account the 30% reduction in concrete embodied carbon that we can realize on nearly all projects today. The results estimates that the embodied carbon of the Interiors portion is higher than the combined impact of Structure and Envelope over 60 years. For calculations, see Figure 8.

Is this Result Indicative of Other TIs?

We think yes! Over the 30+ years LMN has determined when and how to renovate based on changes in functional needs and culture shifts at a frequency not unlike other office spaces. In fact, we are likely showing less embodied carbon than other TIs since we have a relatively minimal palette with an increasingly open office (there are no enclosed offices), and our 2013-5 renovation is open to structure in our open office areas, using existing Unistrut system for lighting support in lieu of acoustic ceiling panels. If the study included product categories currently excluded due to lack of clear quantity or EPDs (such as lighting, trims, etc.), the total impact of Tis would increase. For these reasons, we believe the data we show is a relatively conservative reflection of the impact of cyclical renovations.

Our results align with the CLF TI study(5), showing 36-52 kgCO2e/m2 of impact per remodel, aligning with the CLF low (45) Impact findings. The lack of private offices and reuse of some spaces likely reduced the embodied carbon to well below the medium (90) and high (135) scenarios in the CLF TI study

Looking at the breakdown of products for just the 2014-5 remodels, the chairs, carpet, and workstations comprise over 75% of the total embodied carbon, shown in the middle column. The left column imagines if we had acoustic ceilings throughout the space instead of open-to-structure. The right column shows the significant reduction possible by aggressively pursuing embodied carbon reductions with high-quality, similar-performance products on the market in 2021. Overlaying these interiors reductions on the original graph and comparing to structure and envelope reduces the relative importance of interiors but does not include all the advancements in reducing embodied carbon across other sectors. This study has not looked at what an optimized whole building could be.

While a more complicated spreadsheet was used to perform the calculations, this is a direct output of the numbers contained there. For a deeper look at the raw data, please email Jenn Chen jchenn@lmnarchitects.com or Kjell Anderson kanderson@lmnarchitects.com 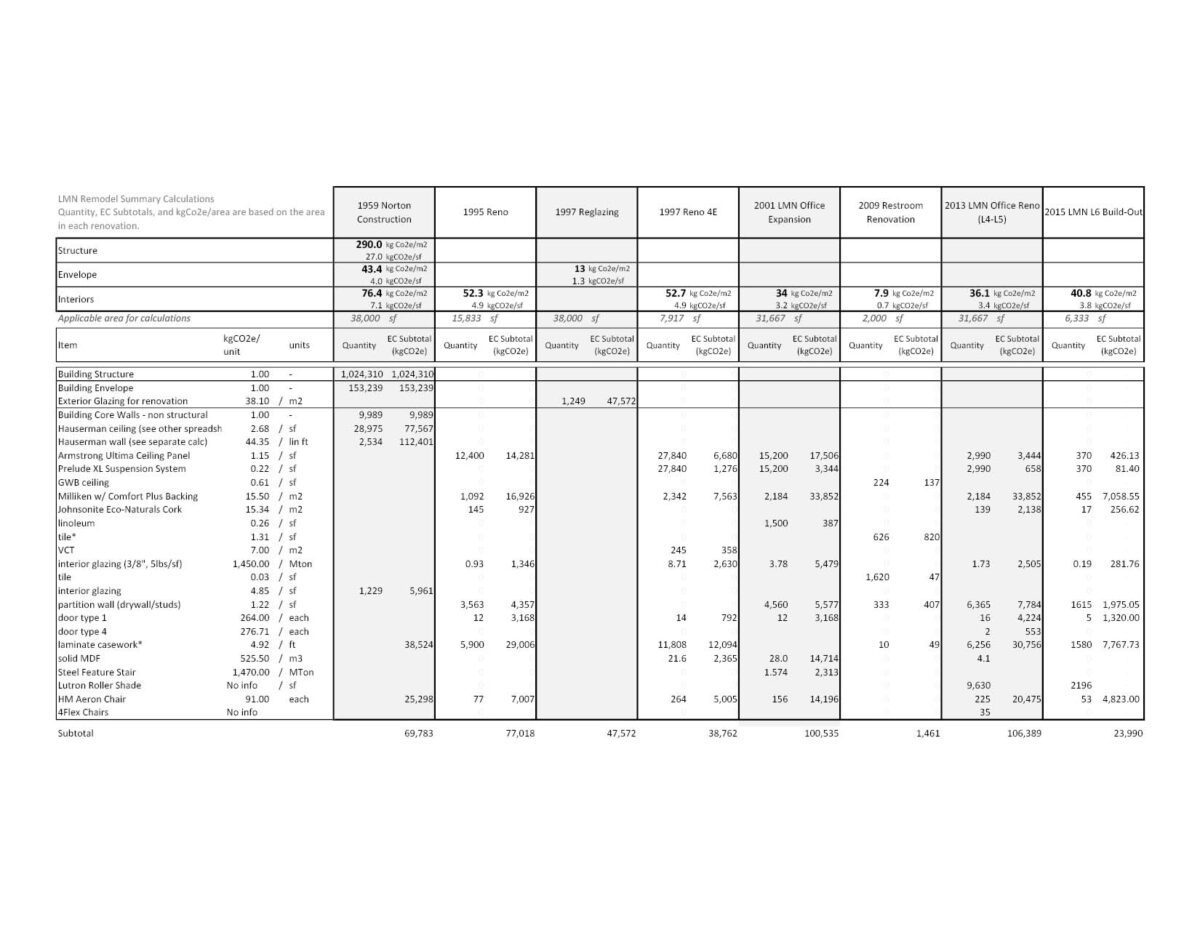 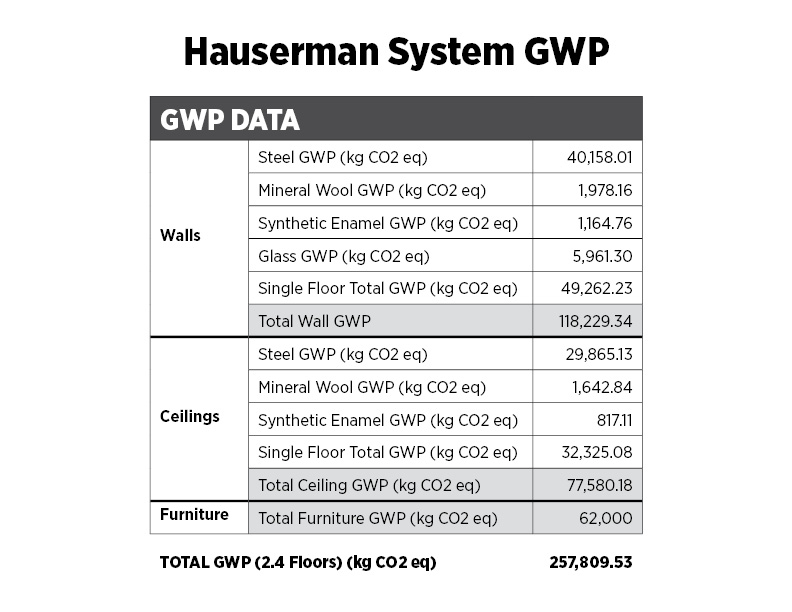 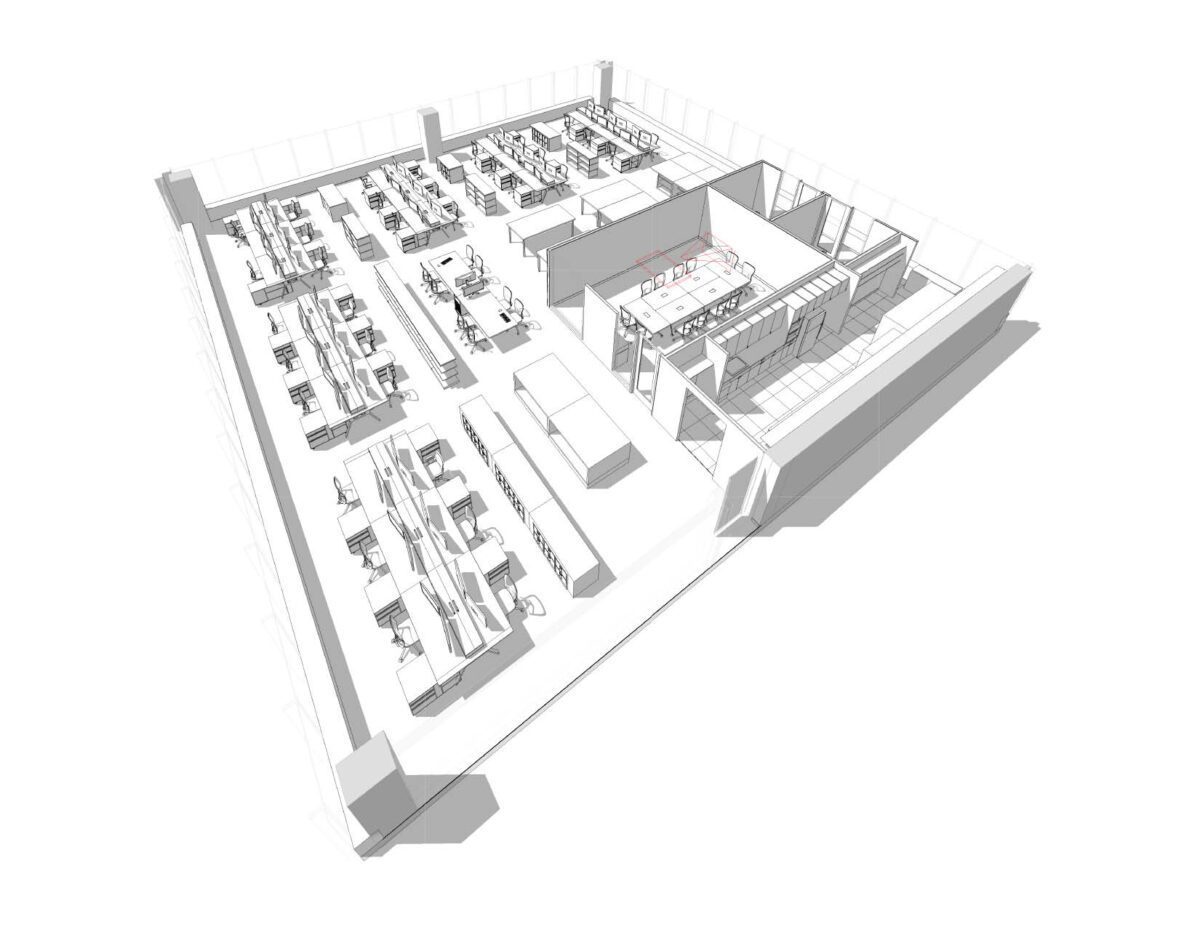 Permission to distribute, remix, adapt, and build upon the material in any medium or format for noncommercial purposes is granted as long as attribution is given to LMN Architects.