Energy modeling game during an internal training course made use of the COMFEN tool.

In their annual 2030 “By The Numbers” reports, the AIA maintains that “Energy Modeling is an essential component of success” in addressing climate change. Why? Imagine a project without cost modeling, or area takeoffs (another form of modeling), where the only time you understand what has been designed is during occupancy? Our industry does this with energy performance when we do not include energy modeling early and often. Early modeling is challenging since it needs to be rapid; often the best way forward is a combination of in-house and third-party efforts. Having a simple, easy-to-use early-modeling tool for in-house use was a known deficiency in our existing process; filling that gap was the impetus for this study.

In 2020, the new Building Performance Applied Research Group at LMN undertook an effort to evaluate various Building Performance (BP) software tools for in-house use, with a heavy focus on energy modeling and daylighting. Compatibility with Rhino and/or Revit was also given a high priority as these are, respectively, the primary early and late modeling tools used at LMN, and experience shows that BP tools rarely get used if they cannot easily make use of the design teams’ existing modeling geometry. Based partly on these considerations, the BP group narrowed down the list of tools for detailed evaluation to six.

To compare different BP tools, the BP group identified a variety of evaluation criteria, such as what types of analyses were available, how useful the tool was during specific design phases, or whether the results were easy to interpret. For each tool, anywhere from two to six group members scored each of these criteria plus gave their overall impression of the tool on a scale of 1 (poor) to 5 (excellent); results are summarized in the below table. Note the choice of criteria and scoring were done in the context of BP at LMN; results are particular to our uses. The publication of this scoring is a contribution to the overall industry dialogue, but not intended to select the best tools for the entire AEC industry.

Evaluation of Building Performance (BP) tools under different criteria, as scored by members of the LMN BP Group. The evaluation occurred in mid-2020 and several of these tools have had significant development since then. The choice of criteria and scoring were done in the context of BP at LMN and results are not intended to be generally applicable to the AEC industry.

During this exercise, the BP group was dissuaded from the notion that there can or even should be one general BP tool for our energy modeling and daylighting studies, just like a hammer does not solve all construction needs. Instead, the group identified three tools for broad use within our firm:

Preparing Revit massing geometry for use with Cove.tool and Sefaira.

In addition to the above, there are a few other tools that a smaller number of proficient LMNers use. Ladybug Tools, a Rhino/Grasshopper-based plugin, is often used for various specialized BP studies; use of this tool is aided by the frequent use of Grasshopper in the LMN design process and the Grasshopper proficiency that entails. A single advanced energy modeler also uses Sefaira, another cloud-based energy modeling tool that is unfortunately hamstrung by licensing arrangements that limit further adoption. In all cases, though, the tools are used to perform studies that complement those performed by our energy modeling and HVAC consultants, who we still rely on for detailed, room-level and mechanical sizing studies. 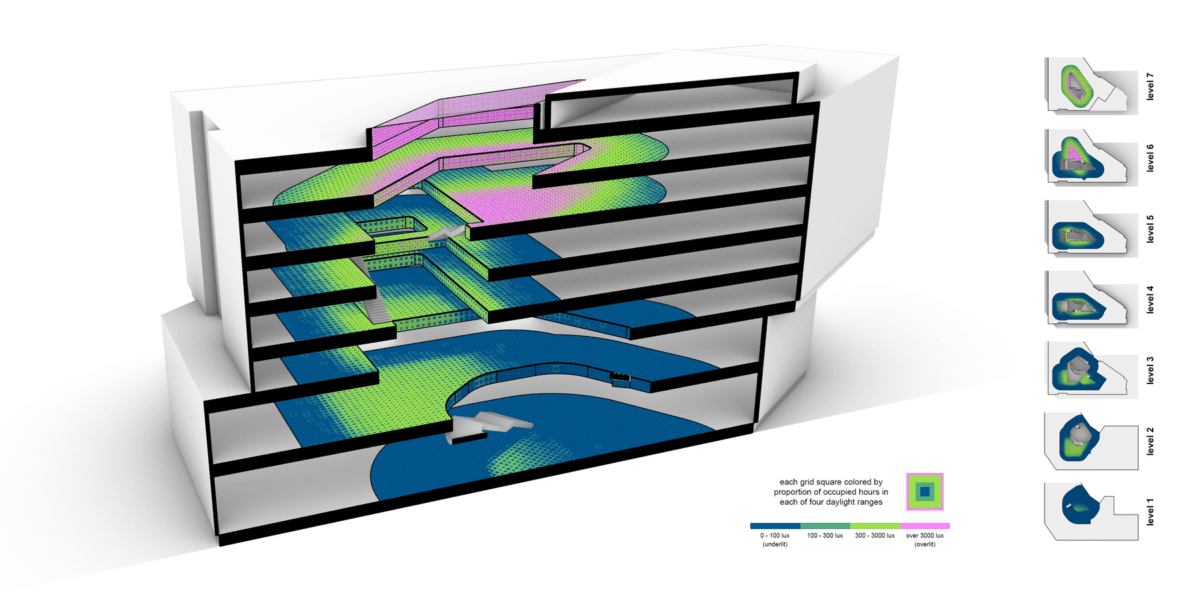 Having used these tools for a year now, we have some reflections regarding those tools and energy modeling in general: